What's in an 'English' Place-name?

English Place-names or rather place-names in the English language, are usually constructed from two or more elements. One element might be an old personal name (eg Balham, (Baela's Homestead), while the others might refer to a local geographic feature or to an early function of the place (eg Chipping Norton, Market North Town). Place-names are often used in archaeology and history as clues to locate sites of archaeological and historic interest and are also helpful in understanding the development of the English Language.

Regarding place-name genealogy and family history studies, approximately 30% of modern British surnames / family names are derived from place-names. These are known as toponymic / topographic surnames and may, in some cases, refer to a family's place of origin.

Use the search form above to if your surname matches to a British Place-name. It may help see where your ancestors might have come from.

Did you know that a place's name can often be an archaeological indicator of its ancient history? For example, most of us are familiar with the word Chester in a place names such as Manchester, Cirencester, Alcester and many others.

In most cases this word is derived from the Roman word 'castra' meaning a defended military settlement. So, if your looking for a places associated with Roman Britain, then as a start, enter Chester in the Place-name element 1 box and search our ARCHI UK database for all the places in Britain which have this word in the name and the archaeology in and around these places.

Once you master the 'hidden meaning' behind place and field names, you will soon be seeing particular place-names as bright neon sign posts to the past.

Get involved in a bit of investigative archaeology and use this search form to find archaeologically significant place-names. The maps and aerial photography generated will help you see the local geography. Following the links to ARCHI will show you the local archaeology too.

Did you know that approximately 30% of modern English surnames are derived from place-names? Surnames which refer to a place-name often show geographic bias. So, you may find more Gledhills in the North of England, than in the South. Use the search form above to if your surname matches to a British Place-name. It may help see where your ancestors might have come from.

The rise in the use of toponymic surnames in Europe since the 13th Century is thought to have been due to a trend in the nobility to link their places of origin to their feudal holdings and hence provide a marker of their status. The other main reason was the migration into the city of people from the countryside, which vastly increased the size of urban populations. People needed more than just their given name to avoid the inevitable confusion which would arise in larger communities if many people shared the same forename / given name.

Place-names and the Development of the English Language

Regarding the development of the English Language, the most important factor in the development of English has been the arrival of successive waves of settlers and invaders speaking different languages. The history of place-names in Britain is closely connected to the presence of various languages at various points in time.

The search form takes wildcards for more powerful searches which are detailed below. Try them and see what you come up with.

Here you search for exact matches of a place-name.

Here you search for matches of a place-name plus place-names starting with that word.

For example, Performing an element search with "stow*", would find, in addition to all "stow" place-names, other place-names starting with the word "stow", such as Stowmarket, but NOT not Walthamstow.

Here one searches for all place-names ending with the element.

Performing an element search with "stow*", would find, in addition to all "stow" place-names, other names containing the word "stow" at the end of the name such as Walthamstow, but NOT not Stowmarket.

Here one searches for all place-names where the search term is in the middle of the place's name.

Performing an element search with "*bur*", would find, in addition to finding all place-names of the name "burg", other names containing the element such as Edinburgh.

[This search not yet implemented]

castle*: The place-name element castle can refer to the presence of a Roman Fort (eg Castleshaw, West Yorkshire).

*by: Often, at the end of a place-name, this place-name element refers to a place within the territory ruled by the Vikings in Early England.

bury: Derived from a Burgh which was a fortified enclosure.

stow: This often refers to a very early meeting place, often of religious importance at that time.

chipping: Derived from the Old English céping, "a market, a market-place”. This word is also associated with céapan (to buy) and céap (to deal).

stan: This place-name element is often a commemoration of Roman occupation. For example, Stanstead probably refers to a stone (Roman) villa or settlement. 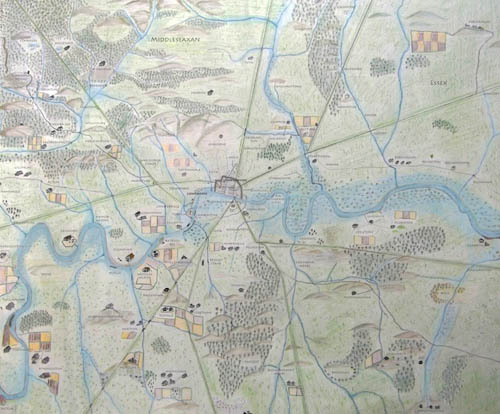 Our Email address is: info@digital-documents.co.uk

Our home page is at: https://www.archiuk.com

ARCHI is an internet-based service. If you would like to contact us, please send an email to: